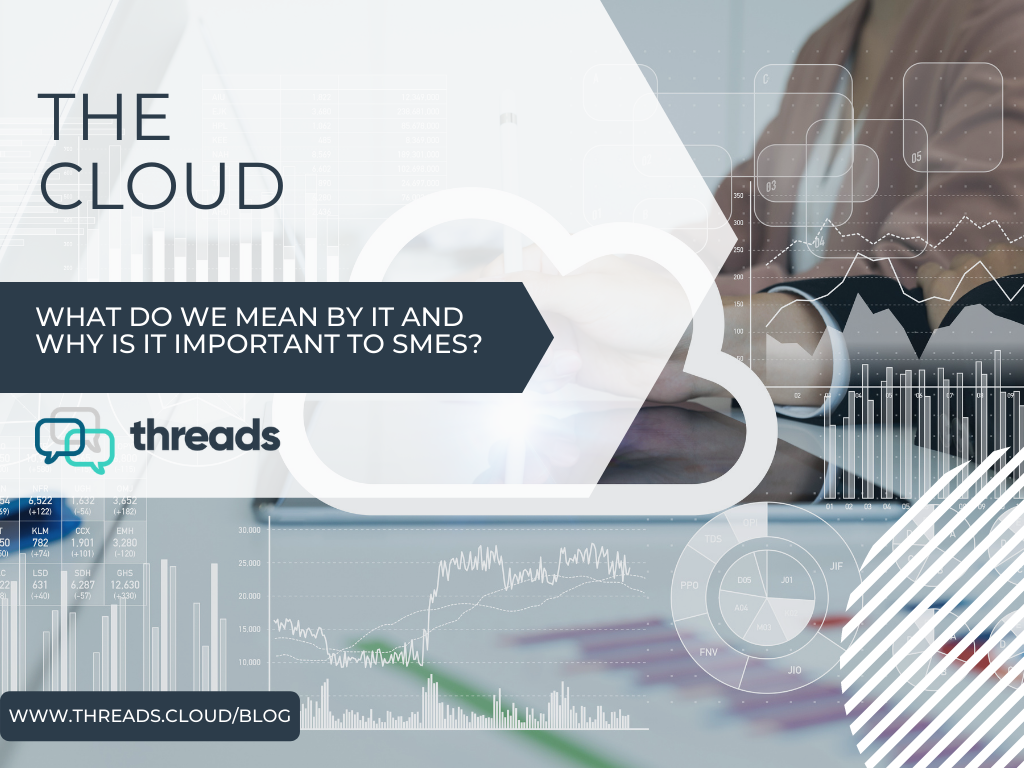 The Cloud is a term that has come to encompass software services provided over the Internet. However, there is still some confusion about the Cloud, so here is a short review of the relevant IT history and what you need to know.

Once upon a time..

Back in the day when computers first made their business debut, they were massively expensive, huge, and by today’s standards, incredibly slow. But they were still quicker than humans at performing certain types of task. Since their cost was still less than employing people to undertake the same work, they soon took off.

The earliest computers performed one task at a time, but with some clever software – an operating system – it soon became possible for one computer to perform several tasks simultaneously. This ability to multitask was a great leap forward.

The next major development was to allow computers to talk to one another. This permitted information exchange between computers and for individual computers to specialise in certain tasks such as distributing email and files.  This is called client-server.

By this time, the cost of computers had reduced, so it was quite feasible for a small company to own several and join them together in a network.

The power of networking

We already had telephone networks and power distribution networks. The innovation was the data network.

Because the first data networks required dedicated connections between computers, the networks tended to be contained within a single organisation or building in Local Area Networks (LANs). However, it was not long before engineers found a way of transmitting data over existing telephone networks, so the next development was Wide Area Networks (WANs) which connected geographically dispersed local area networks.

The arrival of the internet…

Useful as WANs were, they tended to be the preserve of large corporates, government and academia, and initially were not designed to be public. That all changed with the Internet, which was born originally out of military work done in the UK and US.

The Internet is a set of rules by which computers can communicate via Internet service providers (ISPs) – who act like telephone exchanges, routing data rather than (analogue) speech. In some cases, they utilised existing telephone networks by converting  data into speech-like signals – the device that does this is called a modem.

…to the beginning of the World Wide Web

Like the Internet, it is a set of rules that allows computers to communicate and display information to a human user.  A program called a web browser (such as  Internet Explorer, Safari or Chrome) can display information on any computer – for example Mac or PC – to interact with the web application.

Sunshine on a rainy day

Later, as telephone networks were physically upgraded, they became both fast and reliable, and together, they met the last conditions necessary to give rise to The Cloud. To put this in context, early Internet connections (in the 1980s) ran at 100 bits per second. Nowadays, 50,000,000 bits per second is not uncommon for even domestic users.

Applications that previously had to run locally could now run from remote sites anywhere. We call these remote applications Cloud applications.

Microsoft Office is what we call a local (or native) application suite – it runs on a specific user’s computer. By contrast, Office365 allows users to run Cloud applications in just the same way as the local applications. Owned and hosted by Microsoft, it interacts with users’ local web browsers.

So what are the benefits of Cloud applications? Here are a few:-

Applications running on local computers must be installed and regularly updated. Cloud service providers can ensure that users are automatically running the latest software versions. Nothing to install; No capital cost of providing or updating the software or server hardware; no commitment to using the service if the need disappears or a better service is found.

Adapts to your team size

As needs expand or contract, the number or size of Cloud computers can change to automatically compensate. If a business doubles its size, there is no need to procure and install more local computers to run the application. Of course, additional workstations will be required if there are additional employees, but these need only the capability to run a web browser.

Because Cloud services generally communicate with the user through web browsers, users can access them with any device that supports a web browser – say a PC or cellphone.  However, because there are so few different computers and architectures these days, and because cellphones are physically so different from personal computers, there is a trend towards providing dedicated client applications just to interact with Cloud services. So although services such as Whatsapp and YouTube work in web browsers, they are supported better with native client applications.

Most Cloud applications are designed to allow several users to work on the same file simultaneously This is better than exchanging files particularly where several people are involved in editing a document.

Applications running on local computers must be maintained, backed up and secured against physical and malicious damage. Although Cloud computers require the same,  hosting centres are geared up to provide the infrastructure necessary to ensure software security. Also the Cloud service user can mostly operate from any location in the world and change at a very short notice –  useful if there is a fire or a power cut.

Just as multi-tasking uses computers more efficiently, so Cloud services share the same application (although not user data unless required) among many users, hence far more efficiently – ie it is cheaper to share a single infrastructure among hundreds of users.

Tasks requiring high computer power have become feasible for small companies – artificial Intelligence tasks such as speech recognition, neural network learning and timetabling all require vast amounts of computing to be able to provide fast responses. If, say 100 companies each use low-cost local computers, they all get poor response and most of the time their computers are idle. Putting, for example 20% of that investment in a single high-powered Cloud computer is far more efficient, providing faster response and better utilisation.

However, there are some possible downsides to the use of Cloud services:-

The user’s data is hosted by the Cloud service provider. It there is a security breach, then this could impact business too.

Although Internet access speeds are comparable with LAN access speeds of five years ago, the time for the data to get to and from the Cloud provider may have an impact on the usability of the application. We call this latency and when using high-latency connections such as a satellite link to connect to a provider on another continent, the effects can be significant.

At the end of the day, the choice  between using locally-hosted applications and Cloud applications is a trade-off that must be carefully assessed.

However, there can be no doubt that the biggest beneficiary of Cloud services is the small company which generally has much less working capital and resources than a large firm.  While there is normally a subscription (or several) to pay for the use of Cloud services, in terms of administrative time it is usually cheaper for a small firm – and of course there are usually licence costs for software to factor in when using individual applications on locally-run PCs.

This article was originally published in SME Technology Guide.